Many thanks to Canvas @ Oxford early adopters 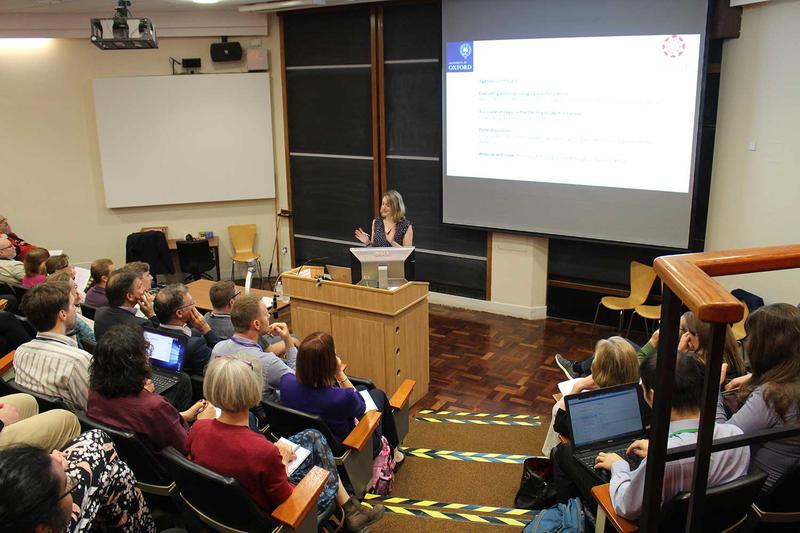 Marion Manton speaking about the Canvas early adopters' achievements at the Canvas: One Year On event in June 2019.

It’s hard to believe that a year has gone by since the Oxford Language Centre became the first of our early adopters to start teaching their students using Canvas. They were soon joined by colleagues from an additional twenty six programmes of study drawn from across all divisions, who together took the first steps to experience Canvas’s range of tools to enhance their teaching and learning.

It’s been an exciting year during which we’ve watched our early adopters build on their knowledge of Canvas, using it to support ‘flipped classroom’ type teaching, as well as exploring new approaches using video and quizzes. They have also discovered the power of tools such as the SpeedGrader, which allows academics to provide detailed and precise feedback online. William James from the Dunn School of Pathology has used Canvas to support tutorials, and Craig Holmes has used video introductions in his mid-term Law course to free up time from weekly lectures on the Master of Public Policy Course at the Blavatnik School of Government.

Early adopters have also played an important role in helping the Programme to prepare Canvas for the next wave of departmental and faculty users, for example by advising on materials such as the fully customisable templates, which will help to deliver a consistent user experience for students. We have been working closely with early adopters to support the rolling out of additional programmes of study within their departments, as well as preparing them for second year teaching activity.

Learning technologists will continue to offer assistance to early adopters as well as those moving to Canvas for the first time, supporting and facilitating innovation and helping to share best practice with the wider collegiate University.

We would like to take this opportunity to thank our early adopters, students as well as staff, for taking the first steps along the Canvas journey with us. We look forward to continuing to share their successes in the months and years ahead.

14 January 2021
Rhona Sharpe, CTL Director, reflects on what we learnt from our students in 2020, and the support in place to help us respond this year

Welcome to new users of Canvas