An online introduction to Roman History

Applying a FIT pathway to tutorial teaching: An Oxford-specific example

Broadly speaking, this learning design fits into the FIT pathway - Tutorials. Christopher Lyes is a DPhil Candidate in Classical Archaeology. This FIT example reflects his thinking and planning as part of his contribution to the Advancing Teaching and Learning programme, run by the Centre for Teaching and Learning.

At the start of Hilary term 2021, I was asked to teach a group of seven students an introductory programme on Roman History. The brief was that there were to be three one-hour long classes and that they were all first-year Classics students. I had to assume that they had no prior knowledge of ancient history, though being classicists, they could be expected to have some skill with language. The classes were also to be comprehensive, but not too onerous, with a minimum of reading required each week as they were to be interleaved with a philosophy course. Due to the pandemic, delivery was to be online as none of the students were physically present in Oxford; and no formal essays, formative nor summative assessment! Clearly, it also had to be enjoyable.

I was left wondering not only what the content should cover, but more importantly how I could create a learning environment that was pedagogically sound, whilst fostering active participation within a culturally diverse and dislocated group. Variation was to be a key factor, as I had no foreknowledge of how familiar they were with the ancient world – beyond their language learning – nor of what other differences might exist between the students in the group. Given the difficult times in which we were operating, I needed to take external factors into account too, for example, were the students self-isolating, or shielding? Did they have adequate facilities at home to be able to contribute confidently?

In order to create a short curriculum that was multi-dimensional and context-specific whilst taking into account these sorts of issues, I needed to conceptualise the differences in experience, prior knowledge, perspective and approach, before even meeting them. Fortunately, as a student myself on the University’s Advancing Teaching and Learning programme, just that week, I’d been exposed to a variety of thinking on designing inclusive teaching and learning experiences. This gave me some ideas about how I could use technology to evaluate prior knowledge, as well as create an environment in which both the active and the more passive students were able to contribute effectively.

The approach to delivery was, then, a combination of flipped and cooperative learning, with the students being tasked with pre-class reading on different levels—the first was a series of webpages with high-school level reading that provided them with a simple, illustrated, overview of the period to be tackled; the second was a piece of more in-depth problem-based reading that required students to apply the factual material to evaluate scholarly arguments. 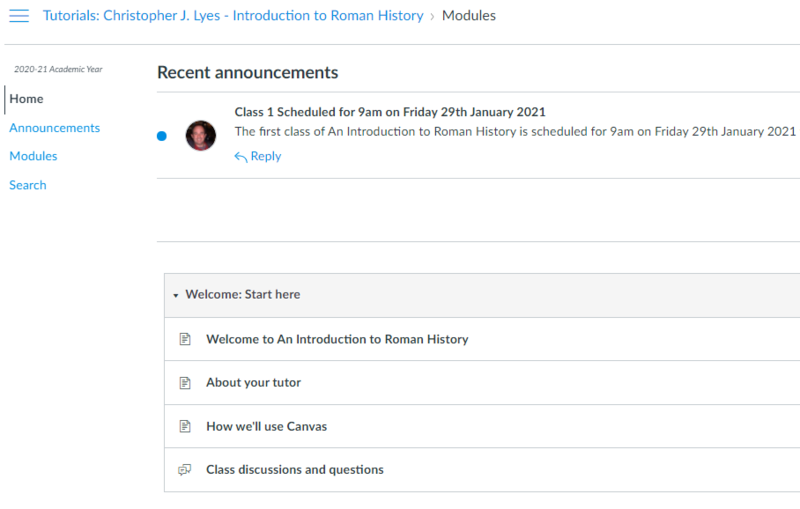 Canvas facilitated that beautifully, for it provided a module structure that allowed me to make sure that the students worked through the material in sequential order (using the option to set ‘Requirements’), rather than jumping straight into the problem-based assignment. This ensured that each student had a good basic knowledge prior to tackling the core reading, something that is often glossed over in traditional tutorial teaching. 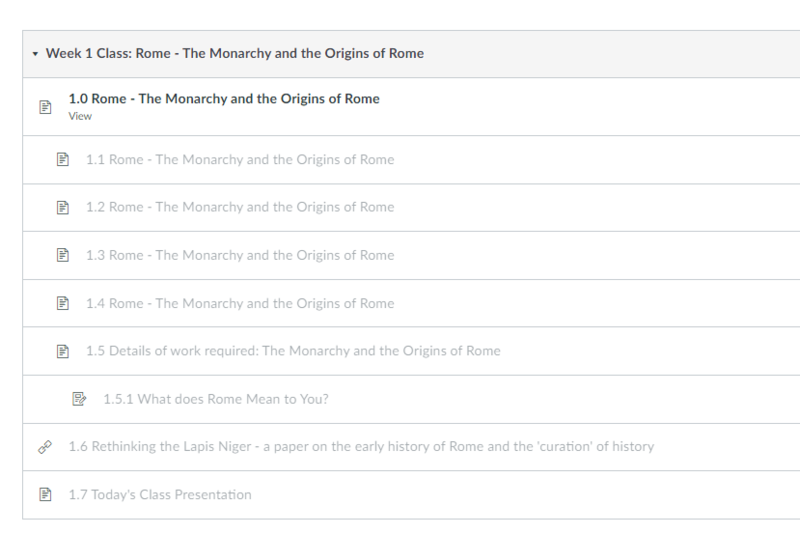 I needed to design a variety of cooperative learning activities that would encourage the learners to participate, especially for those awkward first few minutes when everyone is a little nervous of each other. And in those moments, I also needed to gain some sense of what prior knowledge each student had. As the delivery was to be remote, we used Microsoft Teams, and I used the Announcements feature in Canvas to both set up the Teams meeting and to ensure that each student had a notification of when and where the class was to be. But how to establish prior learning without individually putting students on the spot and asking them—something they might find uncomfortable and embarrassing? And also, how could I break the ice, both between student and teacher, and within the group?

One of the papers that I’d studied on the Advanced Teaching and Learning programme provided the answer. James Lang’s paper from The Chronicle of Higher Education outlines the value of two tools in adaptive and inclusive teaching—peer instruction and in-class polling. Coincidentally, Microsoft had just released a new polling feature into their ‘Forms’ add-in and this allowed me to set-up a simple, anonymous poll before the class, which I could run from within the Teams meeting. The results made it clear that, whilst almost everyone had studied either Latin or Greek previously, there was absolutely no knowledge whatsoever of ancient history. 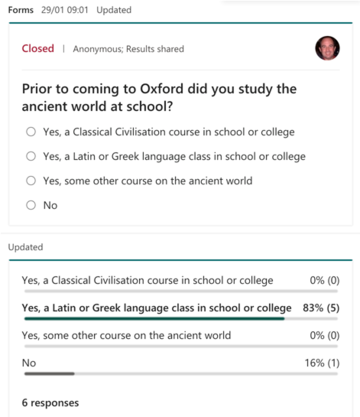 Figure 3. The prior-learning poll used in the first Teams meeting

My next step was to break the ice and get the students talking to one another. And for this, given the very low level of background knowledge, I chose a short video clip from a film which most people will have seen: ‘Gladiator’. The film clip was presented within Canvas (thereby removing problems of format), and the students were asked to watch the film and try to spot the Director’s historical error (No, Falco, Rome was not founded as a Republic!). Using the breakout rooms feature in Teams, I then split the students into small groups and asked them to discuss the question: ‘What does Rome mean to me?’. This was a terrific way to get them talking to each other, and as I dropped into each breakout room, the conversation was exciting and enervating. However, one thing I learned quite quickly from this is that if you are going to use breakout rooms, you need to allow quite a bit of extra time once the students reunite to consolidate the discussions, more than I had planned for!

Breakout rooms became useful again later in the programme, as by then I’d hit a point where the reading really needed to become more comprehensive, but I couldn’t countenance asking all the students to read all the material that I needed them to cover. The topic was the factional strife that occurred between two sides in the last century of the Roman Republic: the Optimates and the Populares. Peer instruction came to the rescue here, for I asked the students to choose one side and to do the reading only for that political group. Then, using breakout rooms again, I broke them into pairs and pitted one against another, Marius against Sulla, Caesar against Pompey. Each student was teaching and learning the perspectives of each side, by explaining and listing to each other. Bringing them back together at the end not only helped them to see the other side’s position, but also emphasised that the study of ancient history is not a single narrative, but a process of enquiry.

Alongside all of this, I used PowerPoint to put a few slides on the screen around which we could focus discussion, trying to keep the visuals entertaining. The slides reminded the students of the key historical bullet points as a framework on which we could hang the more in-depth discussion. And, of course, all three presentations were later embedded within the Canvas course itself, for later reference. All the classes were also recorded from within Teams, which made the automatically captioned recordings available within Microsoft Stream ten minutes later, so that the students could go back and remind themselves of the material, as well as catch up on material they may have missed, which the strictures of life in a pandemic made sadly inevitable.

At the end of the three classes, I made sure to highlight a few other Oxford papers that students would find interesting if they wished to continue a study of ancient history and classical archaeology, and that has since proven to be one of the unexpected benefits of using Canvas to create a short course like this. For it later transpired that several students that I’m teaching this term—who are studying full papers on aspect of Greek and Roman material culture—are indeed coming, not from a classical archaeology background, but from one in the classics. This kind of cross-cutting interdisciplinarity is critical to keep both disciplines alive, contextually aware, and fresh. For those who sense that they would like to improve their grounding in the history of the period, I can now enrol them in this Canvas course, as it’s entirely self-contained, and they can ‘level-up’ their background learning, at their own pace, and in their own time, and be fully ready to engage once we meet again in the new term.

Lang, James M. 2017. ‘How Peer Instruction and Polling have Changed My Teaching’. The Chronicle of Higher Education. 12 December 2017.

SEE ALL RESOURCES FOR FLEXIBLE AND INCLUSIVE TEACHING